Type M is thrilled to welcome the incredibly talented Ann Parker, whose Silver Rush series has won multiple accolades and deserved every one of them. Her latest, Mortal Music, was just released in January 2020. 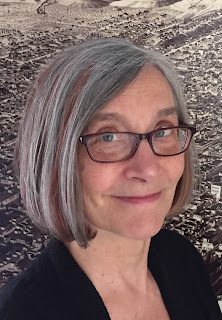 Music, Murder, and Mayhem in the Silver Rush series
By Ann Parker

When I fashioned my protagonist Inez Stannert waaaaay back at the start of the Silver Rush series, I had a few "givens." She would originally be from the East. When her story opens in the first book, SILVER LIES, she would be running the Silver Queen saloon in the silver-rush boomtown of Leadville, Colorado, in the late 1870s. She'd be a married woman, whose husband had mysteriously disappeared, leaving her to handle the saloon along with her husband's business partner. And, she would be an accomplished pianist.

At this point, around 20 years removed, I can't exactly recall when the musicality came to mind in her character development, but it must have been early in the musing process. It made sense, given that music has always been a strong component of my life. Both of my parents were pianists. In fact my father, in his youth, wanted to be a concert pianist (but my grandmother, raising three children during the Depression, put the kibosh on that dream and he became a physician instead). When young, I played a variety of instruments, including the violin and the piano, with great enthusiasm at the start and then with waning interest before exiting lessons, stage left. My brothers had more stick-to-it-iveness than me, and both play instruments to this day—one professionally, the other semi-so. It almost went without saying that, of course, there would be music in my mysteries, and that Inez would carry the tune. 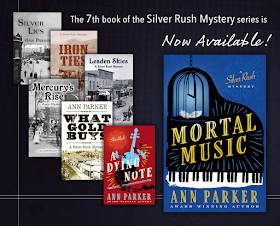 I gave the Silver Queen saloon a much-used and abused upright, and Inez a baby grand piano in her home. As I researched and wrote the first few books in the series, I listened to a lot of radio for inspiration. I can still recall the frisson that gripped me when I was driving and first heard Mendelssohn's Lieder ohne Worte (Songs without Words). I pulled over and scribbled down the information so I could work it into my debut, SILVER LIES. For that book, the musical theme is mostly classical—Bach, Beethoven, Mendelssohn, Mozart, Vivaldi. In the second book of the series, IRON TIES, music from the Civil War and from the railroads get their due, with The Battle Cry of Freedom (Union and Confederate versions) being the spark that ignites a scene of murderous mayhem in Inez's saloon.

Back in those days, my musical reference library was mostly composed of CDs. But time marches on, and so did the series and Inez, until she marched straight to San Francisco, California in the most recent two books of the series, A DYING NOTE and MORTAL MUSIC. Here, her profession took a turn. For a variety of reasons, it didn't make sense for my 19th-century protagonist to continue in the saloon business, however music shows Inez the way forward, and she becomes manager of a music store. Thus, I plunged headlong into the music scene of San Francisco 1881.

In A DYING NOTE, when a young musician washes onto the shores of the San Francisco Bay, Inez discovers he has ties to her past in Colorado. The music in this book reflects that which brought Inez comfort in bygone days—classics such as Beethoven's Für Elise and Bach’s Prelude to the Well Tempered Clavichord. But it is in MORTAL MUSIC, the seventh and most recent in the series, that music takes center stage, and I can blame (or thank) my fictional prima donna, Theia Carrington Drake, for that. When Theia hears Inez play the piano, she asks Inez to be her accompanist for several high-profile personal appearances in San Francisco. However, Theia is the kind of diva who sows discord, resentment, and trouble in her wake. It doesn't take long for Inez to realize that a murderer is stalking the city’s opera halls, and that Theia may be the next victim.


In MORTAL MUSIC, I focused on opera and the musical theater scene in 19th-century San Francisco. Thank goodness for my professional-musician brother and for my editor, who is an opera buff! I was able to glean how professional musicians work with singers and zero in on appropriate pieces of music. I wove into my story opera arias including Dove sono i bei momenti from Mozart's Le Nozze di Figaro as well as popular (and slightly scandalous) ditties such as You Naughty, Naughty Men from the musical extravaganza The Black Crook. (The Black Crook, which featured singers and dancers in short skirts and tights, was famously reviewed in 1868 by Mark Twain who wrote that the musical "debauched many a pure mind" adding "the scenery and the legs are everything.") For the most recent books, I didn't have to rely on CDs; I could wander over to Pandora and YouTube, listen to selections over and over to my heart's content, and pin my selections on the music page of my Pinterest site. (Isn't technology wonderful?) 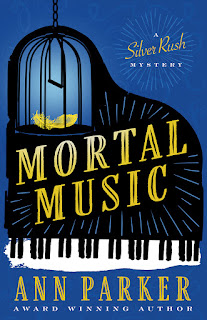 As I wade into the next book of the series, I know that music will again play a part, although how big a role remains to be seen. All I can say at this point is that with San Francisco being the major West Coast port in the 1880s, the songs of the sea are calling to me...

Ann Parker is a science writer by day and fiction writer at night. Her award-winning Silver Rush historical mystery series, set in the 1880s U.S. West, features Colorado saloon-owner Inez Stannert. When Inez leaves Colorado and moves west to San Francisco, California, she re-invents herself as the manager of a music-store and a 19th-century "angel investor" for women-owned small businesses. The latest book, MORTAL MUSIC, finds Inez dealing with dastardly doings in San Francisco's opera world. Broadway Direct (which provides Broadway theater news and reviews) notes, " The period details of life on and off the stage in the 19th century are fun dressing for Parker’s usual clever mysteries. Inez Stannert will surely be back for an encore." For more information about Ann and her books, see www.annparker.net
Donis Casey at 12:00 am
Share

IF YOU ARE HERE TO POST A SPAM COMMENT, PLEASE DON’T BOTHER. It will never appear. All comments on Type M are now subject to review. To legitimate commenters, we’re very sorry for this, but something had to be done. YOUR comments will be displayed ASAP! And thanks for commenting.